Today we decided to ride south and try to get away from the rain... the key word is try...
We headed south out of Inverness with a weather report of clear and cold. So we started out the morning fully prepared with all our electric riding gear on. For those of you not familiar with motorcycling you can now purchase electric gloves and under jackets that plug into the motorcycles electrical system and they act like an electric blanket. They work great! I have ridden in sub freezing weather and still been warm...  So we were well prepared.
We rode into a national forest. Our goal was a town called Spittle Glenshee. We were told this is a must...( I am not sure by who or if they had ever actually been there. )
As we entered the forest the highway went up into the mountains and it got colder and colder which was no problem, but then the rain came!! There was not supposed to be rain.. We rode on and the rain kept coming and coming. We stayed nice and warm if not nice and dry.. We finally got off the main highway in a very quaint town and started our ride to Spittle Glenshee. The road there was great. A narrow twisty lane that crossed another mountain range that was DRY!! The views changed around every bend from barren mountains loaded with sheep and goats to dense green forests with beautiful stone farm houses. The ride was great.. There were also lots of motorcycles on the road and an assortment of sports cars so we knew we were on the right path.. After about an hour of fun riding we saw the turn off for Spittle Glenshee. We planned to spend the night there. What a disappointment!! It was nothing more than an short loop off the highway with two buildings, one a cheap bar and hotel..
So we decided to ride south and see what we could find...
We were pleasantly surprised by a nice little town called Blairgowire. It is right near Balmoral Castle... We decided this would be a great place to spend the night.. We checked in to a nice hotel and waited for a call from the Queen. I knew she vacationed at Balmoral Castle in August and I figured once she heard we were in town she would invite us over...... the phone never rang....
So the next best move was to go to a local pub that had two TVs, one playing British Football (soccer) and the other playing the Moto GP motorcycle race from Sivlerstone England.  Sometimes you just luck into the right spot..
So tonight we are relaxing and making plans to go further south. I know eventually it will stop raining,,,, right??
By the way last night in Inverness, Scotland we stayed right downtown in the entertainment district.. Every other building was a pub or bar and the town was completely full of drunks! The Scottish sure like to drink.. I guess if I lived in this cold harsh climate I might too.
Good night,
Jason 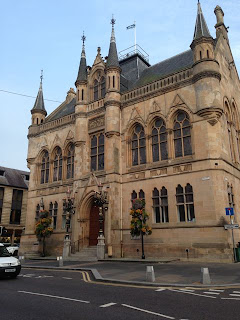 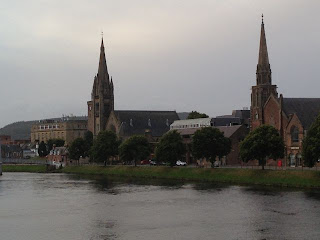