MAKING OUR WAY ACROSS OKLAHOMA

Well we started in eastern Oklahoma today and made it to the town of Clinton in western Oklahoma, about 20 miles from the Texas boarder.  It was a long but enjoyable ride.

We were hoping to get into the pan handle of Texas but we took all back roads so it took longer than we planned, but we are close. It was worth the extra time, the back roads had little traffic, gentle curves, and lots to cows, farms, and small towns to see.

Tomorrow we will have breakfast in Clinton and see the Clinton Route 66 museum then off to Texas!

This morning we got up and the sky looked rather ominous to the north of us. We had a quick breakfast and as we were loading up our bikes we started to feel a few drops of rain and could hear thunder is the distanced. Just then I got a weather alert on my phone saying heavy rain and lightening in 15 minutes! So we quickly got on our bikes and started riding away from the dark sky. At first we could feel the rain starting to get harder but then after a half an hour we were far enough ahead of the storm that the rest of the day was good weather.

At noon we stopped at a small town which was on the old Route 66 and enjoyed a quick bite at a 50s style dinner.

If you asked me what Oklahoma is like I would say after about the first 15 minutes of riding in the country side it was all the same the entire way across. Gentle rolling hills, grassy fields, and trees. It seems the three main industries are cattle, farming, and oil. At least I now know where those excellent steaks come from.

When I was writing about the deep south I got some blow back from one of my more conservative Trumper friends. (Yes I have friends from all walks of life, makes it interesting.) He accused me of not appreciating mid-western values.. Let me say this right now the Deep South is NOT midwestern, Oklahoma is. Here are the big differences I noticed:

-Today I rode basically from one end off Oklahoma to the other, I didn’t see one Trump flag or banner, no confederate flags, no Go Brandon banners, no don’t let them take your guns banners, no drug re-hab signs or bail bondmen ads. There were churches along the road but more modest and without all the hell fire and damnation billboards threatening you to go to church or else.  Also far less poverty and trashy homes surrounded by junk cars and trash. All of those things are all over the deep south. I think the people of Oklahoma are Conservative Christians but more restrained.

-What I did see were beautifully trimmed and maintained ranches and farms, old homes no matter how modest well maintained,  small towns with old classic buildings well maintained but still suffering the affects of the large stores on the edge of town, and not many trashed cars laying around. Also huge wind generator fields powering the state. That looked rather progressive to me specially considering this is an oil producing state. I guess wind power is cheaper than burning fuel oil to generate electricity.

-The people seem to be hard working and very friendly. They also don’t look like they married their cousins or siblings a few too many times.

-The people seemed very direct too. We stopped for gas and a gentlemen about my age came over to talk to me about my motorcycle and our travels. He was a local farmer but by our conversation he was well traveled. The one problem we were running into was our motorcycles use premium gas and we stopped at a couple of stations and they didn’t even offer it so I asked the man why is there no premium gas and he answered with a friendly smile, “We are just too cheap to buy it so they don’t sell it here!” Then he kindly offered to call his friend who had a gas station in the next town and he did not sell premium either but he at least told us where to find it.. Nice, honest, cheap people.

Tomorrow after we tour the local museum we will cross into Texas and then on to New Mexico where will ride the Indian reservations, the mountains and national parks. So far the weather has been excellent. 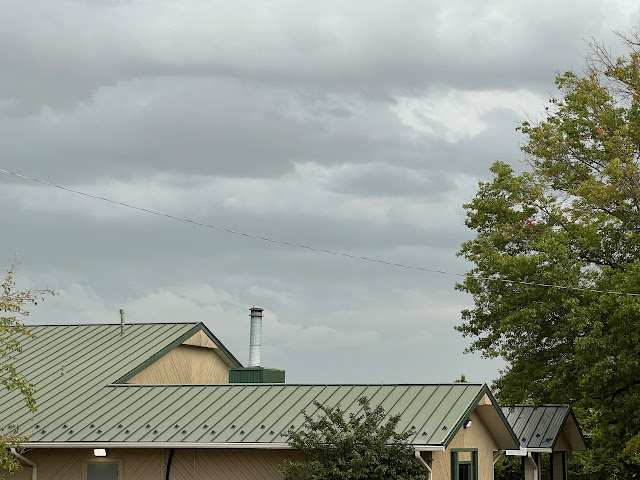 The morning sky from our motel looking rather ominus and the sound of thunder didn't help. 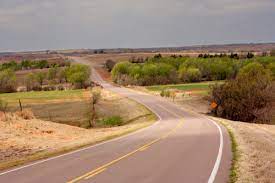 See this road and countryside?? Now you have seen Oklahoma but still great roads to ride a motorcycle on. Notice no traffic! 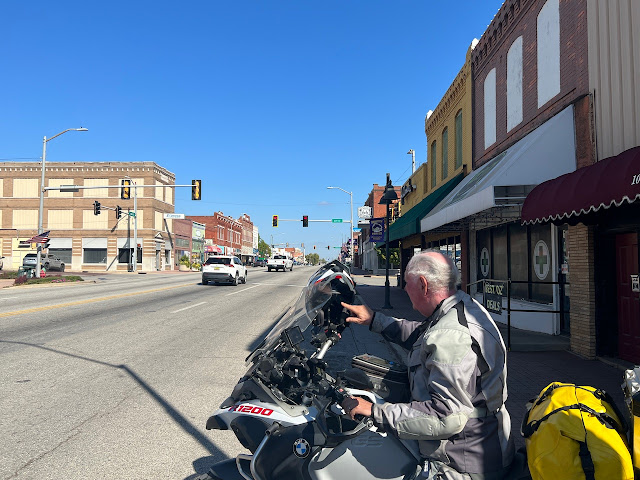 Stopping for lunch along the old Route 66. 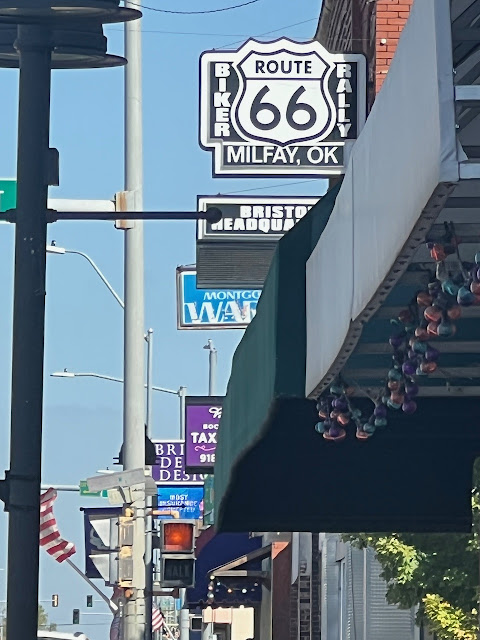 That's us, Bikers rallying for lunch. 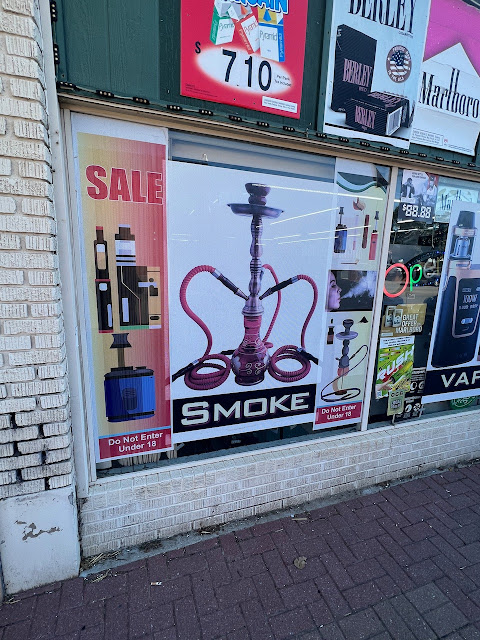 Even midwestern Oklahoma has pot stores...
I guess they are not that conservative. 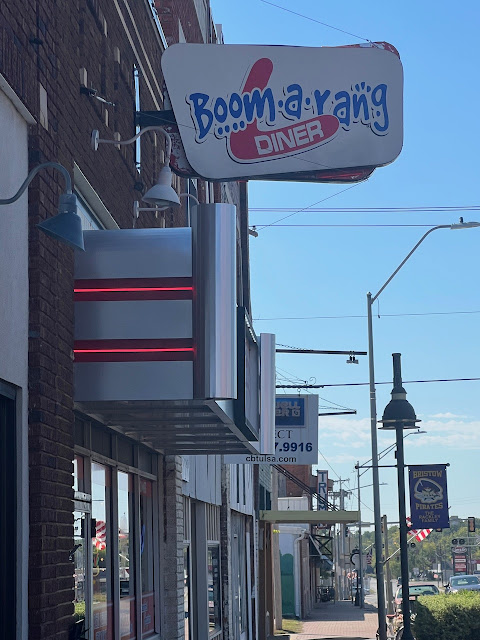 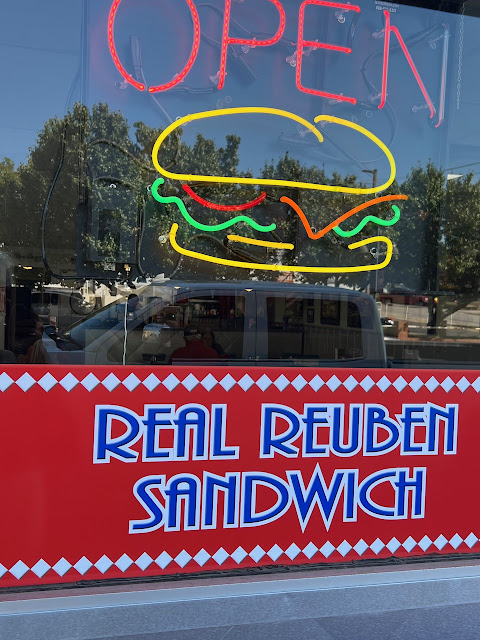 The Reuben sandwich was good for Oklahoma but it can't compete with a good Jewish deli sandwich, or my home made pastrami! 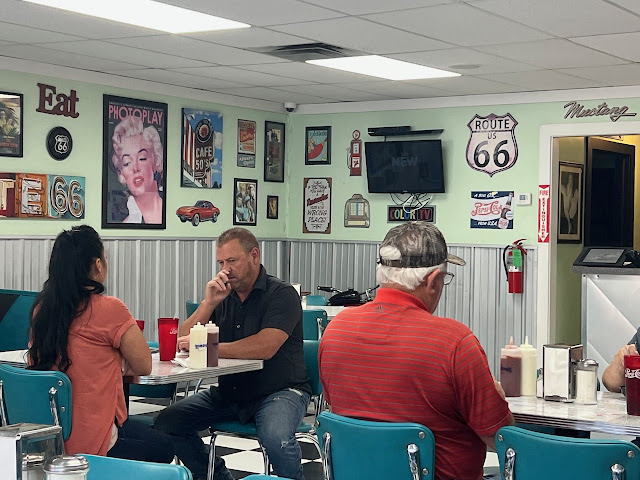 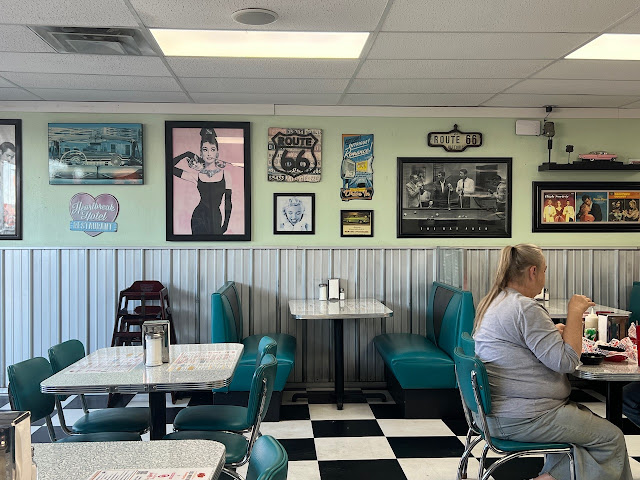 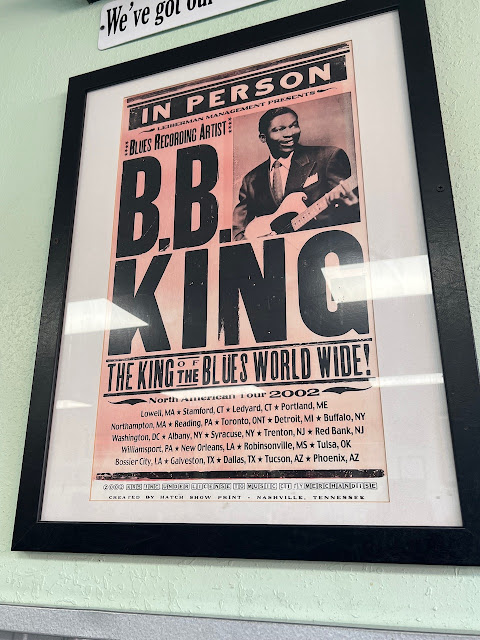 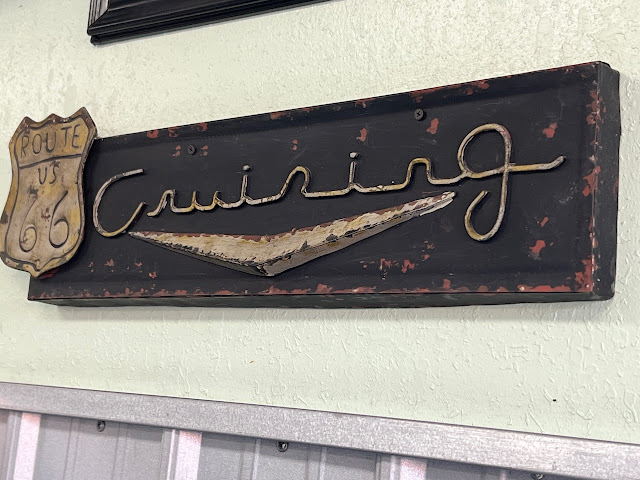 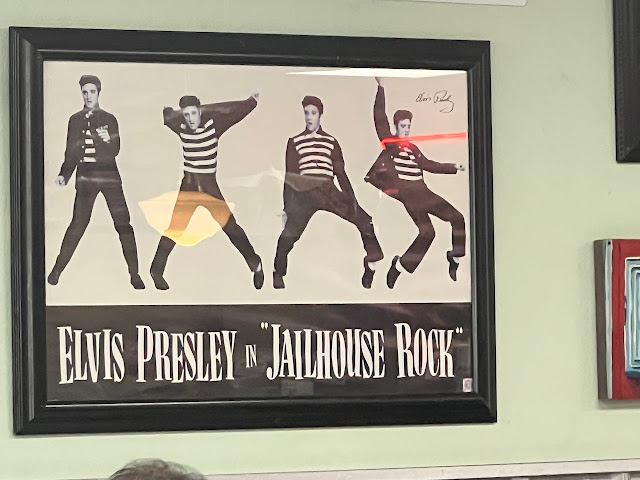 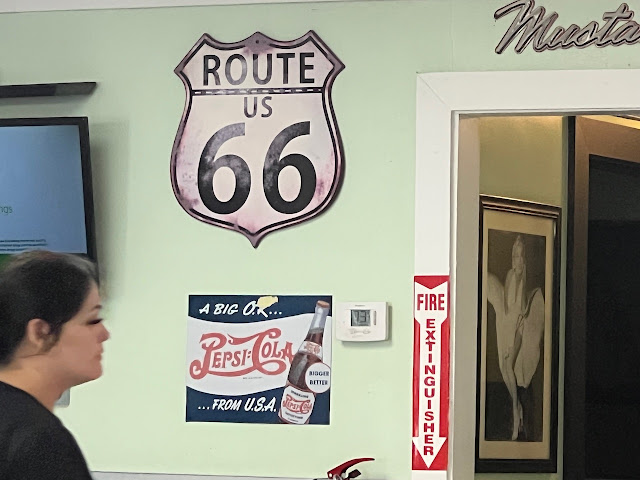 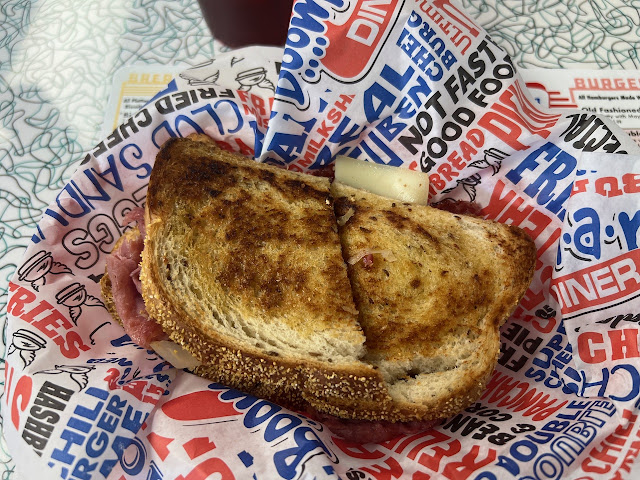 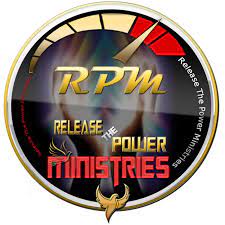 OK I forgot to post this the other day. When riding through the Ozark mountains we passed a church with this sign out from. I think the RPM stands for Revisionist Peoples Ministry. All the churches I saw in the south had different names that I did not quite understand but I do know what RPM is!!
at October 12, 2022